The Overmountain Victory National Historic Trail stretches roughly 330 miles from its southern terminus in South Carolina through North Carolina and into Tennessee and Virginia, and follows the paths that the patriot militia took as they mustered to fight the Battle of Kings Mountain in 1780. This battle proved to be pivotal in the Revolutionary War.

The Overmountain Victory State Trail will follow the 225 miles of the planned route of the National Historic Trail that passes through our state. The N.C. Division of Parks and Recreation will work closely with the National Park Service on the development of the trail. 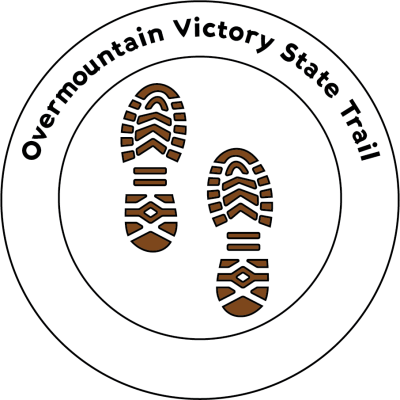 The footprints on the OVST blaze remind us that the march to Kings Mountain took place on foot. The Overmountain Victory Trail Association re-enacts this march annually, taking time along the way to educate hundreds of students about this part of American history.

Please note: These documents are published on Issuu (a third-party publishing website) for the best viewing experience. By clicking one of these links, you will leave the NC Trails website and be directed to Issuu's website.

The OVNCST Friends was formed in 2021 to support efforts on the Overmountain Victory State Trail in North Carolina.

The Overmountain Victory North Carolina State Trail Friends group will use their capacity building funds to hire a part-time Executive Director to complete administrative duties and cover administrative costs for fiscal years 2022 to 2023 and 2023 to 2024. Funding will also be used to develop a website to increase awareness of the organization and trail, and fund a contractor for project development and oversight services as needed.

Need a stamp for this trail on your NC State Parks Passport book? Visit ncparks.gov/passport to request a stamp sticker by mail.